With both the Australian and Victorian AMCA National Titles to his name this season, Jeremy Moore added yet another title to his resume – this time it was last Saturday night’s NSW Title at Sydney’s Valvoline Raceway.

Moore, who is from Kybybolite in the south-east of South Australia, entered the feature race as the highest point scorer following a win, a second and a third placing from his three heat races, survived a frantic opening lap which saw a few of his rivals eliminated as the result of a crash.

After leading away at the restart, Moore found himself back in second place, losing the spot to defending NSW Title holder Matt Hardy. Moore then played the patience game and with 10 laps remaining, made the move back into the lead. He then led the remaining laps to record an exciting win as the margin of victory was just 0.2 of a second.

Hardy, who was looking good early in the race when he was the leader had to settle for second place. Like Moore, Hardy was consistent in his heat races which set himself up perfectly for the feature race. Although unable to defend his NSW Title, Hardy certainly put on a good show as he put pressure on Moore all the way to the finish.

Home in fourth was Tasmanian visitor Andrew Ryder. Showing plenty of fight, Ryder, who started from positon 17 in the field, was on a charge for the entire race and found himself in fourth with around 10 laps remaining.

Rounding out the top-five finishers was Raymond Kime. Recording the best result of the Sydney/Newcastle Club based drivers, Kime was running as high as fourth before losing a few spots and falling back to seventh. A good recovery saw Kime charge back to finish in fifth.

Completing the top-10 finishers was Shane Cartwright (NSW), a hard charging Dean Heseltine (Vic) who was forced to go to the rear after spinning out during the opening lap action after qualifying on the outside of the front row, an impressive Kelsey Allen (SA), Peter Markulin (NSW) and Terry Pankhurst (NSW). 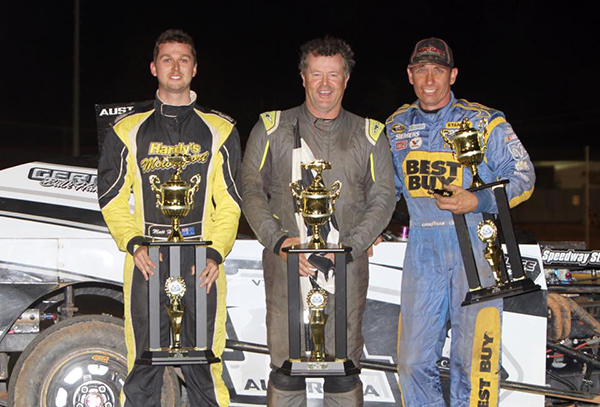 Earlier in the night, there were 12 heat races contested and the wins went the way of Mills, Deahm, Singleton, Kime, McKinnell, Steve Potts (Qld), Molle, Moore, Hardy, Durston, Reeves and current NT Champion Shane Newstead. The latter unfortunately had a horror of a night, where he struck trouble in his heat races and then failed to finish the B main, while Potts, who was one of the event’s leading contenders, came off second best in a crash during the final round of heat races that brought his night to a premature end.

The NSW Title attracted arguably the best field of AMCA Nationals in well over a decade and the racing didn’t disappoint with drivers and officials happy with the night’s racing.

The last blue-ribbon event on the 2017-18 season calendar for AMCA Nationals is going to be the Queensland Title on the Saturday night of May 6 at Brisbane’s Archerfield Speedway.